There is a great variety of different monitor out there, mostly available for watching TV in high-resolution. ASUS had decided to make a difference, with its addition, specifically designed for gamers: ASUS VG245H, an entry-level gaming monitor. 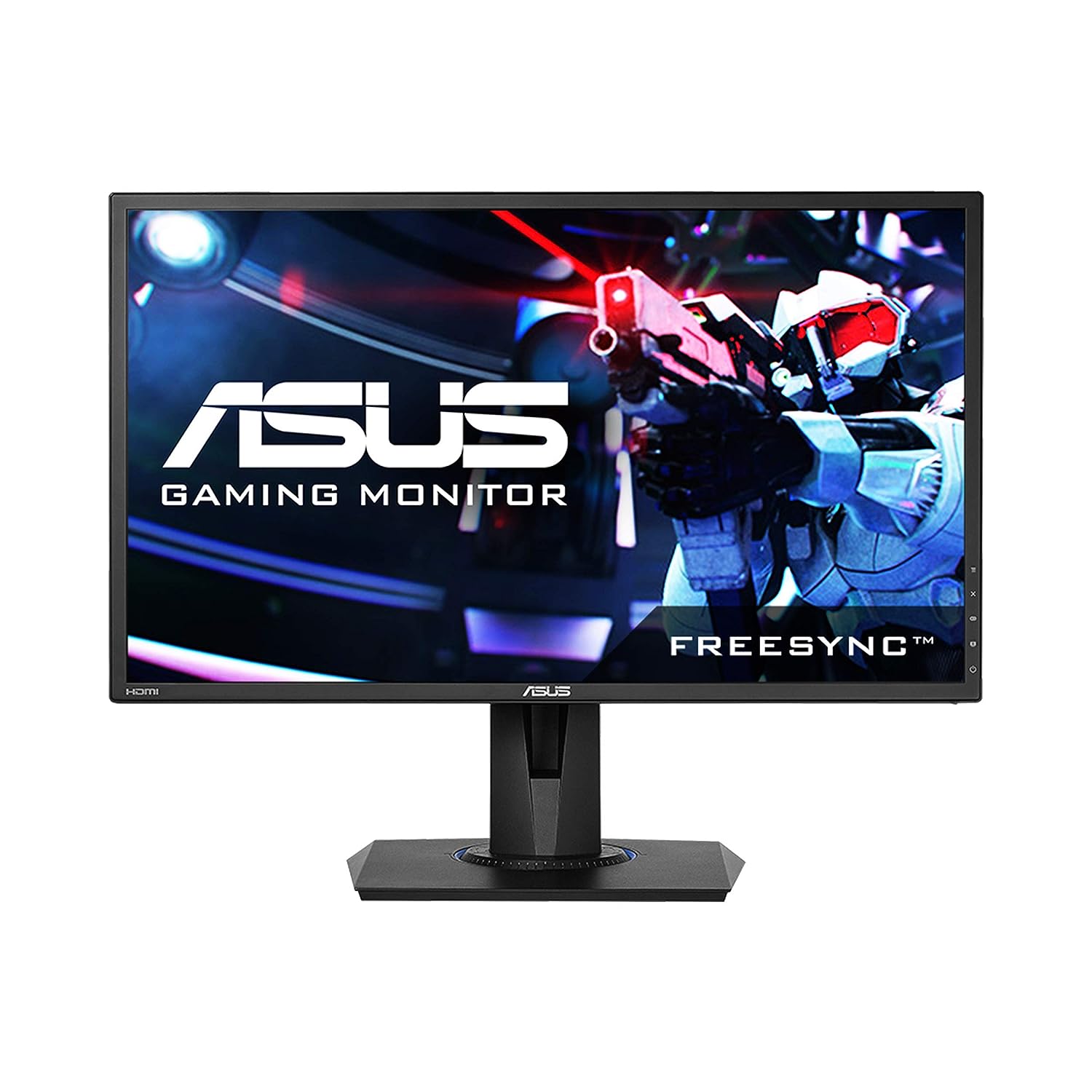 A 24 – inch screen, with FULL HD 1080p resolution, a maximum refresh rate of 75Hz and a quite fast response time of 1ms. Those are the first characteristics that may catch the eye of a possible purchaser. It surely stands out in comparison with other 60Hz monitors in the market. For sure, it eliminates the possibility of issues concerning ghosting and blurriness of the screen.

What stands out for ASUS VG245H is the simple design and aesthetics that comes with, making it quite attractive. The build quality of the screen feels very stable and sturdy while it is provided with a plastic stand for solid support. The hole in the middle of the stand could lessen the cable management. In addition, the ability is given to adjust its height up to 130 mm as well as to rotate the monitor up to 90 degrees, in order to match it to your working preferences.

With a weight of 5.1 kg (quite similar to other 24 – inch monitors), ASUS VG245H could maintain its stability and could be also mounted on the wall with a compatible VESA wall mount. Having the screen without a stand hanging on the wall might free more space.

The resolution of ASUS VG245H comes in 1920 x 1080 with a pixel density of 92ppi and has been evaluated at a standard level with decent quality, satisfactory for most users. Its monitor uses TN panel which does not give a special color result compared with monitors equipped with IPS. However, it could reach maximum brightness level of 250 units with Asus Smart Contrast Ratio at 10.000.000:1, which is not too bright and especially not hurtful for the user’s eyes.

Moreover, its anti-glare system could be quite helpful for better color concentration. Even though the TN panel offers narrower viewing angles and poorer color accuracy with only 72% color saturation (based on product specifications), it could perform well for most of the sRGB color space through a variety of visual modes. Despite this drawback, a user sitting in front of the screen won’t be affected so much by the viewing angles. The greatest disappointment is that the monitor does not have the ability to support more advanced features like HDR.

On the back of ASUS VG245H, two HDMI ports could be found that offer flexibility for simultaneous use of two HDMI – compatible devices. Additionally, there is a D – sub /VGA port, a 3.5 headphone jack and a line in jack for external speakers which are loud enough for the user to enjoy listening from common music lists to background noise from PC games. There are also four buttons to help the navigation through different menus and settings whereas there could be found a small joystick that is quite practical for wireless handling. They have been arranged in a similar way as in many Asus’ screens.

What is more, ASUS VG245H has an exceptional motion handling as it is equipped with the FreeSync implementation which serves as a direct link between an AMD GPU and the compatible monitor. Among other features ASUS VG245H is equipped with, the user could find Timer, Display alignment, Fps Counter and Crosshair close related with what the gamer want. Plus, adequate control is provided on the menu in order to calibrate and adjust different settings regarding the level of contrast, brightness and color temperature.  In its cons, comes the lack of DisplayPort which is not common among monitors.

As a gaming monitor, ASUS VG245H will fill any demand for a decent price under $200. It surely doesn’t break the bank and works without flaws. Based on the given characteristics, it is suitable for both console and PC games, since its fast response time and low input lag will please the majority of gamers. A user might sacrifice color quality for response time performance.

Furthermore, it is also a decent monitor for use at the office. With the brightness level being appreciated as decent, it could be placed and used with ease in low light environments. Moreover, with the common resolution of 1080p, it covers most of the needs in the digital community. Last but not least, its ergonomic design will solve many problems concerning the stabilization and the adjustment of the monitor.